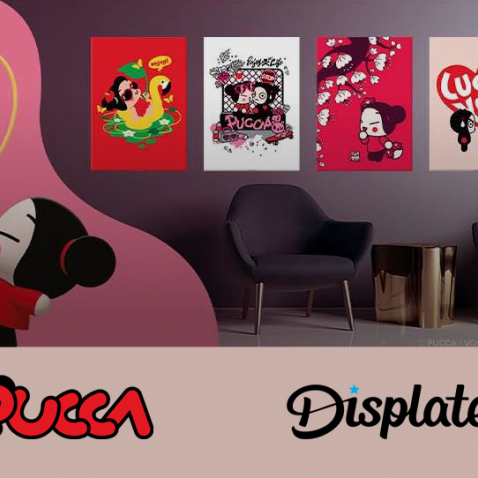 DISPLATE RELIES ON PUCCA FOR ITS NEW COLLECTION OF METAL POSTERS

Displate, a leading managed marketplace specializing in creating one-of-a-kind metal posters, has signed an agreement with DeAPlaneta Entertainment to sell unique magnet-mounted metal posters of Pucca, the lifestyle brand based on the iconic character who was a hit in 170 countries. The new metal posters are now available worldwide on Displate website.

Pucca joins Displate´s portfolio of well-known brands such as Star Wars, DC Comics, The Witcher, Cyberpunk 2077, Marvel and NASA. Fans will now be able to enjoy at their homes´ walls with her authenticity and message of love. Each Displate is a thick metal plate with gallery quality giclee print on it, verified by the Production Master´s signature and hologram for added authenticity & collectors value. For every Pucca purchased poster, Displate will be planting 1 tree in order to have a positive impact.

“We are thrilled to announce a cooperation with DeAPlaneta Entertainment, which gives us a chance to provide our customers with one-of-a-kind officially licensed metal posters featuring stunning and beloved Pucca”, said Monika Radtke, Partnerships and License Manager at Displate.

Having achieved over 554 million YouTube views and around 2.2 million social networks followers, and with 3 Seasons, Pucca is a hit all around the world. Pucca has already developed important partnerships for lifestyle with famous designers such as the famous Spanish Maria Escoté; Pull&Bear and Bershka Inditex brands; and White, the Italian designer who created the Pucca True Love capsule. In addition, Pucca launched her own Pucca Store across Europe to allow her fans to find exclusive Pucca fashion, design ware and accessories.